Wow, spring training, an event I now feel so far removed from it feels like baseball isn’t even going on, is less than a week away from daily games on TV or in person. Yesterday, however, the distance closed a little thanks to a hand extended from the Nationals inviting smaller papers and bloggers not in Florida to a conference call with a chance to ask questions of team president Stan Kasten, players Ryan Zimmerman and Adam Dunn, and manager Manny Acta. Acta was on the minor league field and running late for the call, so we were treated to a bonus of pitchers Joe Beimel and Joel Hanrahan.

Not being accustomed to getting news remotely, I was unprepared and had no phone recorder, headset, or ability to transcribe the entire Q&A session aside from my lightning fast typing fingers. I balanced the phone on my shoulder with kinked neck and furiously typed away, gradually changing to an odd form of shorthand before giving up entirely unless the question was interesting to me. Luckily, others transcribed the whole thing.

So with many thanks to the Nats for reaching out to us basement dwellers, I’m going to re-read through and find something to talk about. I know I chuckled and even laughed out loud a couple times, like when Adam Dunn half whispered after saying he’d play anywhere the team wanted him to, “notice I said third!” (as in first, outfield, third – wherever they put me). They were also funny taking seats at the “launching chair”. Sadly, the one comedic opportunity question fell kinda flat – one questioner asked if Dunn’s Phil Collins batting music would blend with the others (mostly rap and hip hop).

Anyway, hopefully I’ll have a post coming about this that is not a transcript, unless you really want to see my odd shorthand. Really. I also wonder if this is a sign of things to come with the Nats reaching out a little more? That’d be cool! (photo creds, anyone??) 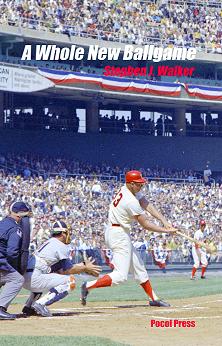 At the Potomac Nationals winter banquet headlined by Hondo himself, I sat next to a man and his son who had also zipped straight there from the Nationals fanfest. We got to talking and it turned out the man, Steve Walker, was finishing a book about the 1969 Senators. Now that book, A Whole New Ballgame: The 1969 Washington Senators, is available for pre-order through publisher Pocol Press and will be published mid-April.

Stephen Walker has extensively and lovingly researched the 1969 Washington Senators for the past 15 years. He interviewed 16 Senators for A Whole New Ballgame including: Frank Howard, Dick Bosman, Darold Knowles, Del Unser, Ed Brinkman, and Ken McMullen, as well as coaches Sid Hudson and Wayne Terwilliger, radio announcer Ron Menchine, bat boy Paul Oppermann, and numerous fans. A member of the Society for American Baseball Research (SABR), Walker’s articles have appeared in national and regional SABR publications and the Washington Baseball Historical Society’s quarterly newsletter. He is a regular speaker at SABR’s annual Baltimore-Washington chapter winter meetings and writes a Washington baseball-focused blog at www.stephenjwalker.com. Walker lives in Ellicott City, Maryland with his wife and three sons.

Despite a long and uneven history, Major League Baseball‘s Washington franchises have hardly been the stuff of legend. However, in 1969, when new owner Bob Short coaxed batting legend and rookie manager Ted Williams out of retirement, these annual no-names climbed out of the depths and straight into the hearts of Washington baseball fans starving for a winner. Led by The Capital Punisher Frank Howard, whose tape-measure home runs sometimes seemed like optical illusions, the Senators simply won ball games with a determination rarely seen in D.C. environs. A Whole New Ballgame showcases the 1969 Senators‘ magical season, complete with player bios, photographs, stats, game action, and stories.

I have not read the book yet, so this isn’t a review… but I’m always for supporting authors writing about their passions 🙂 (anyone still interested in a Maryland Lighthouses book? I have boxes of them left!)

If only the native language in the Dominican Republic was French, this would have been unveiled a month ago! All those years of bucking the trend/norm and taking French instead of Spanish has finally come back to haunt me. The extent of my Spanish speaking is the ability to count to ten. Of course, I never had the intuition to realize I would ever need to know Spanish back in my school days. Now I’m going to spend some time trying to learn a new language as an adult!

New Nationals first base coach, Marquis Grissom, has been receiving a bit of press lately on his foundation and hopes of using major league name recognition to promote his youth baseball association and dreams of building a baseball academy someday. Sound familiar? Nationals manager Manny Acta launched the 501(c)3 nonprofit ImpACTA Kids Foundation in 2007 with the same desires and a goal of providing opportunities for kids to achieve their dreams in both the Dominican Republic and US by emphasizing the importance of education, health and athletics.

Before taking his place behind the autograph table during the winter caravan at the Martinsburg, WV mall, Manny walked over to where I was pulling out my photo equipment. “I have to talk to you,” he deadpanned. Oh my gosh, my mind raced. Had I said something horrible he didn’t like? Did I post a photo I wasn’t supposed to? Why else would he want to talk to me?

“No! You do websites for a living, right?” He went on to explain that he was looking for a volunteer to redesign his foundation’s website and was wondering if I would do it. “That’s it?!” Whew, what a relief! And an honor! I was thrilled! His only requirements were it be modern and dual language – reaching out in Spanish is very important to him. (muy! See, I know another word!)

So here we are in 2009, and the ImpACTA Kids website has been relaunched with a modern look and a Spanish language mirror site. Donations can be made online and supporters can even comment by registering locally or using their Facebook, Yahoo!, or Google account. Future events will be covered quickly on the site and some videos will also appear this year!

In conjunction with the announcement of the site redesign comes the news that Acta will also begin blogging on MASN’s website – both typed and video. Of course his video blogs will be recorded in English and Spanish! He will also participate in wired Wednesdays. Knowing personally how difficult raising funds for a nonprofit is, particularly in this financial climate, I sure hope all this exposure helps him attain his goals and I really look forward to continuing to help out in any way I can.

Now where’s my Rosetta Stone system?? I felt so guilty hounding everyone I knew that speaks Spanish to translate the English site into Spanish (or at least fixing Google Translate’s version). Without that piece, the site would have been ready a month ago. Many many thanks to Manny’s sister, Anayma, for her eagerness to help out. Also, a graphics credit is due to twoeightnine (same guy who designed the logo here) for the awesome homepage image creativity on photo of Manny with the kids.

No, not *that* prez… Nationals President Stan Kasten will host an online chat on washingtonpost.com at 11 AM tomorrow (Tuesday). Hopefully no translator required. You can submit questions early and often.

While trying to come up with creative ways to flesh out this post rather than just providing the link, I began reflecting on the many different aspects to “baseball”. I mean, sure, there are of course the games and the players. Add in the personalities, injuries, training staff, coaches (mostly new this year), and you have more depth of interest and parts. Of course the players and records add up to box scores and statistics. The sum of those parts are what most casual fans care about.

Ok, so then on top of all that there is the baseball operations group, scouting (domestic and international), player development, all the minor league organizations, and the people who take point on the nitty gritty there. Plus marketing, community relations, management of the stadium improvements and concessions, charity work and community outreach…

I was trying to think of questions other than the obvious Jim Bowden/Jose Rijo/Dominican Republic ones I’m sure he’ll get hit with (and answer nonspecifically), but didn’t want to bother with roster issues, so started contemplating what exactly he does other than tell everyone to stay hush on topics. Now I’m even more at a loss for ideas!

I love sports. I love baseball. I love the Washington Nationals. I am not a journalist. This makes my coverage biased, far from hard hitting or challenging, and completely sporadic in both timing of updates and topics. So for those of you looking for breaking dispassionate news or gloriously worded feature articles, sorry.

And to my family, I apologize for my lack of availability during the summer months when baseball is full swing. (Nearly time to say our goodbyes, eh). I admit, I’m not the best wife or mother from April through September. Luckily, school is out most of that time.

I am trying to further my ambitions in these areas and have availed myself to all media outlets who would have me, either on air or by using my photography.

Thank you for your understanding! 😉